APRS FOR THE MASSES 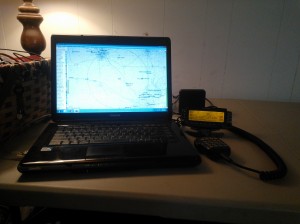 My home digi in operation.

For a long time I thought that APRS was pretty much a solution to a nonexistent problem.  It provides position tracking, but how many times can you follow your buddies around on a map before that gets boring?  It uses a 1200 baud packet radio protocol, but most packet has been dead for years.  The only exceptions are a few DX cluster nodes and some emcomm stuff.  And even at that, 1200 baud is slow when most any gear can run 9600 now.  So, what’s the attraction?

My thoughts changed after tracking a high altitude balloon.  APRS really proved itself invaluable in this endeavor.  We were able to not only copy direct packets from the balloon, but also see the beacon packets on aprs.fi using a smart phone when we were out of range.  This made recovering the payload much easier–of critical importance when there’s the potential for a high altitude to travel outside of state lines and beyond.

At some point the location beacons stop getting reported to the APRS-IS network if it gets out of range of a digipeater.  The last two times it was when the balloon was still 2-3000 feet up.  This prompted me to examine how many digipeaters were in my local area.  I live directly between two fairly large cities.  Indianapolis and Lafayette both have wide area digipeaters but there aren’t any local digi’s in my area.  Just one I-gate in Lebanon.  I thought it might be nice to set one up.  This should help provide coverage for local passing motorists and may be of help to the local ARES team in the future.  Just last fall we had a destructive tornado come through my county only 10 miles away!

I’ve done a lot of reading on different ways to setup digi’s and I decided to purchase an older Kenwood TM-D700.  This dual band data radio will operate APRS on one VFO and also VHF or UHF FM phone on the other VFO simultaneously.  This is different than many dual banders that will operate phone on both bands, but not data and phone at the same time.  The added benefit is that I now have a handy radio in the house for repeater/simplex operation.  It was easy to setup the APRS features and get the packets beaconing.  Then I enabled it to digipeat local WIDE1-1 packets and saved this config to one of the Programmable Memories.  Phase two involved taking the digi to the next level.  I downloaded

The guts of the system are housed in this box under the table.

aprsisce/32 on my spare laptop.  I had to make a couple changes to the xml file and then it would operate as a digi.  Then I changed the 700 to run as a KISS TNC and connected it to the laptop.  This proved simple once I found correct straight through F/F serial cable.  The 700 still has an old school DB9 male serial port so I didn’t have to construct a special serial cable with a mini DIN connector like the newer TM-D710 requires.  After making all these changes I saved the config to another Programmable Memory channel.  Now my digi can operate stand alone or with the laptop.  Using the laptop is nice since it shows all the activity in the area and also handles APRS messaging.

New year, new projects.  Trying to kick off 2014 in grand style.  I’ve been so busy working on ham radio projects I’ve hardly even gotten on the air.  My online logbook looks pittiful!  Projects are really enjoyable for me…and often are very good learning experiences.  But I do miss making radio contacts.  One of my recent projects involves setting up an APRS digipeater.  Not a wide area one like in big cities, but something local that will help get packets from mobile or low power stations out to the bigger stations and onto the world wide networks.  This interest all started back in November when my buddy Nick N9SJA and I went chasing a high altitude balloon that had APRS tracking.  You can read about that adventure in my previous post.

I’m happy to say that the project is successful and fully operational.  However it’s potential is not yet fully realized.  I feel like I’ve just begun and have so much to learn about best practices and proper setups for a local digipeater station.  My choice of radio is a Kenwood TM-D700.  This radio is no longer in production, having been replaced by the TM-D710, but it’s still a good radio and available at a discount used.  It’s mounted in my family room and connected to a dual band J-pole antenna in the attic.  The antenna is one of those homebrew arrangements constructed from a piece of 450 ohm ladderline.  The nice thing about the Kenwood is that it has built in APRS capabilities that can operate on one band of the radio while letting the other band function for normal voice duty on 2m/70cm, simultaneously.  Right now this is a very simple arrangement.

The D700 has a serial port on the front of the radio that will allow it to interface with a computer.  This will allow you to get a visual on what the radio is hearing.  One of the programs I’ve used for this is called APRSISCE/32.  It can operate as a monitor only or can actually control the radio.  After getting a passcode, it’ll allow you to beacon packets from the radio and also directly to the APRSIS network if connected to the internet.  With some modification to the XML file it will also act as a digipeater.  So now I have multiple options on how I wish to operate the station.  An added bonus is now I can monitor local simplex and repeaters without having to go out to the shack.

So where do I go from here?  I think I’ll mount it all in a box and do a little cable management so it looks better in the main room of the house.  I also think it would benefit from having a backup power supply in case of power outages.  This happened just last fall when a tornado ripped through my part of the county.  It’s my hope that the local ARES/Skywarn volunteers might be able to make use of my digipeater when needed.  When the weather gets up somewhere above freezing I plan to construct a new and improved antenna and locate it outside for better coverage.  This attic antenna is deaf compared to the Diamond X500 I have connected to the dual bander in the shack.  Crossband repeat might also be handy as I have a couple dual band HTs that could be pressed into service.  A final option is to setup different operating modes using the Kenwood Programmable Memory function for each scenario.  This allows for five completely different setups that can be programmed into preset buttons on the radio control head.  I’ve rambled on long enough.  Stay tuned for another upcoming project blog coming soon.  After that I may get around to making some contacts!